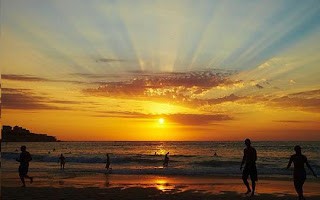 I detest mornings.  I am an insomniac, so I am all too familiar with the concept of being up at a sunrise.  Every morning, the sun rises, reminding me that for yet another night…I have not slept.  It is torture to me.  I am not the type of person who welcomes the sun with a cup of coffee and a positive attitude.  The sunrise says to me, “you are already several hours behind the pack, girlfriend.”  It says to me that it is now time for me to go to sleep, finally, and waste a good portion of the day.  By the time I wake up again, it will be about 3pm.  Too late to do any thing productive.  Generally, I fall asleep around noon, wake up late afternoon and by then, life has pretty much passed me by.  I resent the morning a great deal.  It bothers me.  And, no sooner did I see the sunrise, then I am waking up with a sunset looming only a mere three hours away.

However, the only time I make peace with the morning light is when I am at the beach.  When I am on the beach, I don’t feel so much animosity towards the sunrise.  I appreciate it then…because the water is glimmering.  There are people on the shore, starting their day and admiring the sunshine.  Generally, these people have had a good nights sleep and are happy to see the sunshine…and I look at their faces with great appreciation for what they are feeling.  I know at that point…I can lay a blanket out on the sand, fall asleep under the sun, wake up in the late afternoon as I usually do and feel like I spent the day at the beach doing what everyone else is doing.  Lazing about just soaking in the sun.  It’s okay then, to greet the morning.  It doesn’t mock me so much when I am on the beach.  I don’t feel bad about having an insane sleep schedule.  I don’t hate the fact that I woke up so late in the day, because when you are on the beach…sleeping until the late afternoon is not only acceptable, it’s welcomed.

But, in my daily world…I hate mornings.  They remind me of just how much of my life I am wasting fighting with my body’s internal clock.  And it’s a waste of time.  A complete and utter waste of time.  It makes me feel bad about myself.  I hate feeling that way.  My sleep pattern has been erratic since I am a little girl.  Sometimes, I don’t sleep for two or three days and when I finally do, it is because the sun has risen and said to me…don’t you think it’s time to go to bed?

And I always agree…and go to bed.

I feel comfortable at night.  There is something about being awake all night long when most of the world is asleep that brings me comfort.  I can be alone in the silence and it is alright. I don’t have to talk to any one. I don’t have to answer to any one.  I don’t have to get dressed.  I don’t have to wash my face, brush my teeth and go out and run pretend errands that do not exist.  I can just sit quietly in the soft glow of my computer and do my thing.  Read.  Study.  Write letters.  Watch mindless television programs.  My DVR is filled with television programs that air during the daylight hours that I can watch at night.  Sometimes, I do. Sometimes, I don’t.  But at night, everything is my prerogative.

Besides, everyone knows calories consumed after sunset don’t stay on the body.

I hate mornings.  I hate everything about them.

And just when I decide to break up with them for good, my husband takes me to the beach and reminds me why it is okay to fall in love all over again.

It’s okay to cheat on a sunset, now and then.

Yes. I already wrote my post for the New Year.  It was fabulous. Did you miss it?  Well, go the hell back and read it.  It was all about love with nice stories, sexy music and of course, the joy that is my life.

Now, I am involving myself in the “Focus 52” project, where we creative types will be taking photos, blogging, showing off our goods (no, not like that…perverts) in a collective effort to post our stuff at least once a week, every week, for a year.

I am a commitment phobe.  Don’t believe this?  Ask my three husbands.  Yeah.  It’s like that.

However, I truly feel I can devote myself to this project.  I watched my girl Janice do her 365 day project, where every. single. day. she took another photograph and uploaded it, blogged about it and she really moved me with her work.  It inspired me and now that she is sponsoring the less taxing Focus 52 project, well, this is something that I feel I can do…especially with her at the helm.

I recently started taking pictures.  Not great pictures, but pictures of moments that make me say…wow, I would love to write about that moment.  So, with camera in hand…I grab the moment.  I’m not a professional photographer by any means.  My experience goes as far as in the mirror pics of myself for Facebook or boobie shots on my phone that I text to my husband.  But, for the purpose of just grabbing the moment, my skills of point and click are good enough.  I just want to capture enough of the moment for me to take it home and write about it.  My focus will now be on exactly that…capturing moments in photos and then, talking about that particular moment in time.  What it meant.  What I was feeling.  The circumstances surrounding it.

This project will not only give me the opportunity to commit to my writing once again, but allow me to branch out just the tiniest bit into another creative outlet.  You don’t have to be good at something to love what you do.  (See: President George Bush). 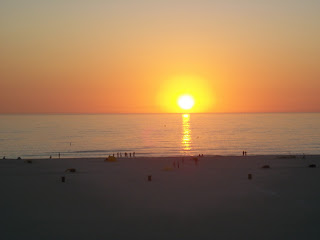 This photo was taken New Years Eve, 2010.  It was taken from the balcony of our hotel room overlooking the Gulf Beaches in Treasure Island, Florida.  A better photographer would  have known to center this bitch, as the sun usually doesn’t lay lazily to the right.  At this particular moment, I was thinking…this is the last sunset of the year.  When the sun sets…it will give way to a new year, a new start.

I think I am going to like being a part of this project.