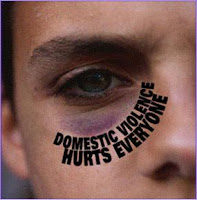 Forgiving someone. Not as hard as forgiving yourself, but a challenge nevertheless. There are a few people I could put under this category. A perfect example would be my own father, who selfishly left my family behind only to succumb to a cocaine induced death back in 1986. I think I have made peace with that. He was a man-child, who never really wanted the ties of marriage to bind him let alone the children that came along with that commitment. I have let that one into my mind back and forth over many years and believe I have long since come to terms with the fact that the man lived the best way he knew how, fast and on the edge, and eventually died the same way. I have a lot of his traits only I feel I am stronger than he was and his death was an example to me of the road I could have taken had I not been more careful.

But, with this being Domestic Violence Awareness month, I carefully thought over the aspect of forgiveness. Some might be horrified by my choice, but for me, this just feels right. The person I am trying to forgive is Tony. If you are a long time reader of this blog, then you will know that Tony is the man I was with for 2 and a half years, who beat me within an inch of my life. It started with a slap in 1989 and ended with my being in the hospital in November of 1991, bleeding in my skull from a brain hemorrhage.

For all these years, I couldn’t bring myself to feel anything but hatred for this man. Now, nearly 20 years later, all I can do is feel pity. Pity for him. Pity for the fact that he had such a hard and traumatic childhood that he felt the need to take it out on the flesh and bones of a woman he supposedly loved. When people would ask me “is there anyone in this world that you absolutely hate,” my answer would be Tony. Not even a pause. Not even a thought. It was something I had programmed my mouth to say.

Now I realize that hate is such a wasted emotion. I don’t hate him any longer. When I think of him, it is with sadness. Nothing more. I used to have deep-seated regret stemming from my time with him. Now, I feel he has done me some what of a service. He has made me a much stronger woman, knowing I am capable of living through a situation that others might have died in. He let me know that I am the type of mother who would protect her children at all costs, no matter how horrible the situation might be. He made me an activist, working diligently for rights of women everywhere. He made me rise above, showed me how powerful I actually am and what I am capable of when cornered.

To me, forgiving him is the ultimate. It is like forgiving the person who stole your child from you. He stole a huge portion of my life. Not just the two years that he beat and battered me, but many years to follow. All the years of self-loathing. All the years of physical pain from my various injuries. All the mental and emotional pain that had to be treated by doctors dumping various and sundry drugs down my throat to right my wronged brain.

But now, all that is gone for me. And I think, if I ever encountered him now, I would do so without fear. I would be able to look him in his eyes and where once upon a time I might have asked “why”, I find that that doesn’t really matter any more. I would be able to tell him that I forgive him. He was a child of abuse and neglect. He related to me the only way he knew how, with fists rather than words. It was his only way of having power in his life, the power that was stripped from him as a little boy. I understand that now. I can empathize with him…

and I believe with empathy comes forgiveness. And Tony, I forgive you. My nightmares about you are long gone and I wake up every morning with a huge smile on my face, knowing what an amazing life I have since created for myself. I hope somewhere in the world, you are living the same way and are released of the demons that caused you to brutalize the things you loved best in all the world.

I wish you peace. I hope you have found it.