This year has been a tough one.  A really tough one.

I could sit here and rehash it all, but I am not going to.  There’s been a lot of loss this year, both in the physical and emotional sense.  It’s been a tough one, I’m not going to lie.  It seems to happen every other year or so, which still makes me more fortunate than most, but definitely not as good as others.

But yes, this was a hard one.  I could barely catch my breath from one tragedy before there was another.  It just seemed to run, non stop, in waves.  My stress and frustration levels were at all time highs for most of this year, especially the latter portion, from July forward til now.

Things aren’t perfect.  They never will be, nor do I expect them to be.  I just want it to slow down some. Allow me to breathe a bit.  Throw the curve balls a bit more slowly this year.  Give me a chance to recover from one thing before you hit me with the next.  I am only human and while my shoulders are broad and my back is strong, there is only so much pain one person can take at a time.

Yet, I always feel that the new year should not necessarily be a time to reflect back. I am a firm believe that old acquaintance SHOULD be forgotten and never brought to mind.  It’s the past.  There’s nothing you can do about it save to learn from it and move forward.  I am not the same woman I was five years ago, five months ago or even five minutes ago.  We are all works in progress, constantly evolving, growing and changing.

I was trying to think of what my key word for 2013 would be; the word that I would think to when trying to plan my life course for this year.  Last year, it was “promise”.  I made some promises to myself and for the most part, I kept them.  These are not the same as resolutions, which I feel are silly contracts we make with ourselves and usually, they are preordained to fail.  My key word is just a reminder to hold certain things dear to me.  The promise of happiness.  The promise of extracting the negativity from my life path.  The promise to remember that tomorrow is another day and all the disasters of one day don’t necessarily carry over into the next.

This years word is “transform”.  There are a few things that I would like to transform about myself, but I would not be so bold as to make myself promises I don’t intend to keep in the form of those horrible resolutions.  The root word of resolution is resolve and let’s face it, sometimes the resolve just isn’t there.  We are stronger some days than others.  It is widely believed that if you make a resolution and then, fall prey to the opposite of whatever it is you resolved to do, you have failed.

I, for one, am not about to set myself up for failure.

So, transform for me, will be a slow process of change.  Changing the things that I CAN change while knowing that certain things will always be out of my control.  I can transform how I choose to react to things and not feel as though I have failed if my transformation does not immediately become a learned behavior.  I am going to take it easier on myself this year.  I am not going to cause myself hurt, pain or anxiety.  I have had quite enough of those self destructive passages in previous years.  I have extracted most of the people who cause my mind agony from my life.  While a few still litter the wall of my Facebook page, they are not there in copious amounts any longer…and the “delete” button remains a close few inches away from my fingertips should I need it.

What I won’t transform, however, are the things that others may perceive as my flaws. I will NOT transform my personality.  I am brash, crude, sometimes obnoxious, definitely crass…but it walks hand in hand with something else that I am and that is well intentioned.  I don’t mean harm.  And, when I cause it, I am also versed in the art of apology.  I have discovered long ago that a weak person does not apologize.  An even weaker person will not accept them.  This is not to mean that if I accept your apology, that I still choose to associate with you or keep you in my life.  I have only chosen to forgive your transgression.  Be grateful.

In the days of old, most transgressions of others would have landed you with a five knuckled greeting to your jawbone.  I have “evolved”, which I believe was my word of 2008 or so.  Maybe 2009.

In closing, new year, but not necessarily new me.  Just some “transforming” to do.  A little housecleaning in the spiritual sense.   Some adjustments to make as I get closer and closer to the person that I want to be.  Baby steps have gotten me through the first 46 years of my life, so I don’t suppose I will be making any giant leaps any time soon.  Change should come slowly…not like a huge 20 foot wave crashing in on you, but rather, a little trickling of water through the rocks and stones of a constantly running stream.  It should come slowly, gently, softly.  Resolutions, to me, are those 20 foot crashing waves.  Some survive them.  Some don’t.

I’m not willing to find out the hard way.

Happy New Year to all of you.  May lucky number 2013 bring you all the joy and peace that you could possibly handle…and then some.

And, in keeping with tradition of blog posts gone by, I leave you with this: 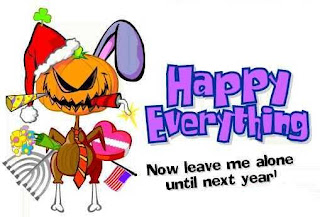