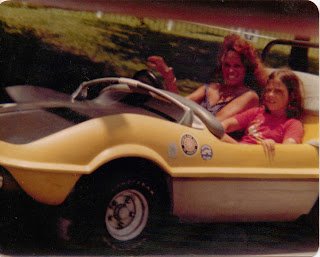 The sultry redheaded, Raquel Welch lookalike you see in that yellow car next to the little girl…is my mother.  Well, it is my mother circa 1975.  The chubby kid with the stringy hair flying all over the place?  That’s me.

This photograph was taken at Disney World in 1975 by some guy who was dating my mother at the time.  I know he who was, I just don’t care to talk about him.  Any way, the reason for this photo is to remind myself that, once upon a time, my mother was a very vibrant and alive person.  She used to have fun.  She used to allow herself to let her hair down and enjoy herself.

It was very difficult being her daughter once upon a time.  She was a traffic stopping beauty.  Literally.  Men would get out of their cars in Midtown Manhattan just to watch her walk by.  And of course there would be chubby me, braces, glasses, stringy hair and the occasional zit huffing and puffing alongside her, trying to keep up with her long-legged stride.  I remember distinctly the catcalls.  Men would hoot and holler at her as she would walk by.  She would just toss a playful glance over her shoulder, wave in a coy fashion and then, look down at me.

“Men are very silly creatures, CP,” she would say.  “You will find out just how ridiculous they can be, once your boobs fill in.”

Then, she would laugh which in turn, would make me laugh.  I was always in awe of her though.  She was incredibly beautiful, very smart, a savvy businesswoman and never lacking for a boyfriend who would wine her and dine her.   She always made them pay for a babysitter.  (“If he wants to take you out, CP…you make sure he takes care of your kids, too.  If he wants to see you that badly, he will have no issue with that.”)  She would make them pick up a pizza or some Burger King for me and my brother. (“If I am going to go out with you tonight, I don’t have time to cook for my kids.  Bring them over some take out.”)  And, very rarely did she let these guys into our apartment after they would drop her off from a date. (“Don’t give away the milk, CP.  Always let them buy the cow.”)

I never really got what that last one meant, because she said it all ass backwards all the time.

Anyway, watching her grow up as a single woman in the 70’s helped me to grow up somewhat cool, confident and self assured.  My mother was far from the best mom on the planet.  She had her issues, for sure.  But, what she did do was give me little life lessons all the way through, reminding me that while I may not look a certain way now, at 9 years old, I would have the rest of my life to grow into the woman I want to be.  Don’t rush it.  Don’t push it.  Stay a kid as long as you can…because you get to be a woman for the rest of your life.

She made me a very confident woman.  While my friends were struggling with their self-esteem, mine was large enough to require me to sleep in a double bed just to accommodate my ego.  While my girlfriends were always worried about being too fat, too thin, too short, too tall…those things never entered my universe.  I was always very confident, very self assured and well, perhaps a little full of myself.  I think my personality came from trying to emulate that woman that I would walk alongside in Midtown Manhattan.  She always looked like she was on stage, performing for the masses.  She walked like a supermodel–chin lifted, eyes up, that red mane of her blowing in the breeze.  She would toss her hair around now and then, raise her face up to the sun and smile.  She was brimming with self assurance and I was dying to play that role.

I played it so well…that I became it. And now, it is who I am.  Self assured, confident, loving myself, my body and my life despite its flaws.

Because, I am now the age my mother was then.  I have aged.  She has aged.  The memory has aged.  This photograph has aged.

This past weekend, we were all on a cruise ship together.  She scarcely wanted to do anything or go anywhere.  She was so tired all the time.  Worn out.  Her confident strut turned into a little more than a limp and a shuffle when she walked.  During the trip, she took notice of my 5 inch high heels and shook her head.  She said to me, “You are so funny, the way you strut instead of walk.  You look like a supermodel when you walk…like you are running the show.”

And I couldn’t help but laugh to myself…and wonder, if she only knew that my training in life came from running with short little legs alongside my beautiful red haired mother on the hard concrete streets of Midtown Manhattan, all those years ago.