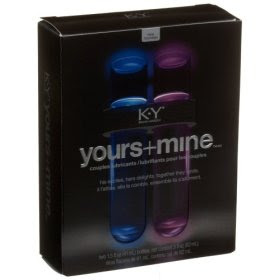 I don’t usually do product endorsements. Well, unless I was getting paid for them from places like “Pay Per Post”, may they rest in peace. But this week at the beach, my husband and I discovered something that MUST be shared with all couples. I don’t care if you are gay, straight or into horses…you must try this product.

I’m sure by now you have seen the commercials for KY Yours and Mine brand lubricant. Guy says one bottle does wonders for him. Chick says her bottle does amazing stuff to her. When they combine…you hear something combust, or some fat chick start singing opera. Generally, I don’t give in to television ads. They are usually not the predictors of what I intend to purchase. However, the purple and blue bottles got to me and I simply had to know what was in these bad boys that would make sex so explosive.

Let. Me. Tell. You. Something.

This product must be purchased. The stuff in the blue bottle, for the men? It’s hot. Literally hot. Gets hotter when you breathe on it. (Oh, sure. Like you don’t know how I figured THAT one out.) Now true, it tastes sorta like cough syrup, but for the reaction it gave my hubby, it was worth it. He kinda felt like all the blood rushed to his dick and made it throbbier than usual. Yes, throbbier. I can say that. It’s a CP-ism. Now the purple bottle stuff? The stuff for the woman? Wow. If you ever wondered what it would be like to play with yourself using ICY HOT or Ben Gay, then this is the stuff. It gets REAL frosty cold. I mean, icy! Hotband says it tastes like Spearmint, so that’s a plus for the guys.

So, after all the poking, prodding, diddling and such and of course, after the taste test, we opted to see what these products would be like when combined. After all, this is what they are meant for…the big comb-O. I slathered his blue stuff on him and we doused me in my purple stuff and went for it.

It was like sitting on an ice cube in front of a fireplace. Things were getting hot that should never be hot and other stuff was getting cold without causing shrinkage and there was just temperature issues all over the place! It caused us to make all sorts of unnatural sounds and howl like wilderbeasts in heat.

The downside? The bottles are small, so they go pretty quick. Hotband and I used half a bottle each in one session (mind you, our “sessions” are rather long and extensive. I wouldn’t recommend this stuff for newbies or quickies.) It has a sticker value of near twenty bucks, but it is soooooooooo worth it. Trust a bitch.

I imagine that the stuff would be good for self-indulgent moments as well…though my husband did mention that the cold stuff made him feel like his dick was frostbitten. Just threw some hot stuff on there and it neutralized him immediately. Just some hot stuff…and a little TLC courtesy of CP. *snicker*

So, if you are looking to shake up the party a little and have some good wholesome fun with lubricants, I would highly suggest KY Yours and Mine as a must have for the nightstand, next to the toys.